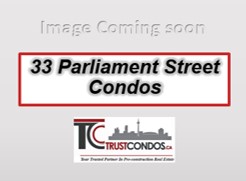 About The 33 Parliament St Condos:

Residents will find the 33 Parliament St Condos quite transit-friendly, with multiple TTC bus stops and Trams stops just minutes away. Union Station is approximately a 23-25 minute drive, as well.

Post-secondary institutions are just a short drive from the 33 Parliament St Condos and some include the University of Toronto St, George Campus, Victoria University, OCAD University, and Ryerson University.

Founded in 1985 by Garnet Watchorn and Moshe Tamari, Graywood provides a full range of real estate development and investment services, with a team that now includes over forty professionals and support staff.

If you want to talk numbers, Graywood has developed over 28,000 housing units in several asset classes including residential lots, low-rise housing, mid- and high-rise condominiums, hotels and retirement residences, with a combined value of over $5.4 billion. Graywood currently has over 3,300 units (3.8 million sq. ft.) under development with a value of over $1.7 billion.