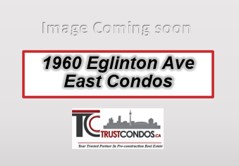 About The 1960 Eglinton Ave E Condos:

VIP Access to Get the Extended Deposit Structure & Promotions

Residents will find the 1960 Eglinton Ave E Condos quite transit-friendly, with multiple TTC bus stops just minutes away. Residents will also be steps to the upcoming Eglinton LRT, which will feature 25 stops. Kennedy Station is approximately a 8 minute drive, as well and will connect riders to Toronto’s transportation hub, Union Station with approximately 26-42 minute transit ride.